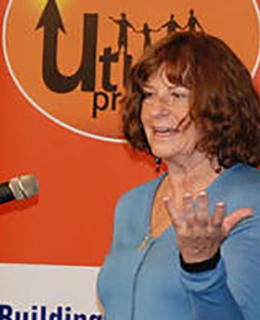 Shirley R. Steinberg is a Research Professor of Critical Youth Studies at the University of Calgary. She is the author and editor of many books in critical pedagogy, urban and youth culture, and cultural studies. Originally a social/improvisational theatre creator, she has facilitate happenings and flashmobs globally. A regular contributor to CBC Radio One, CTV, The Toronto Globe and Mail, The Montreal Gazette, and Canadian Press, she is an internationally known speaker and teacher. She is also the founding editor of "Taboo: The Journal of Culture and Education", "The International Journal of Youth Studies", and the Managing Editor of "The International Journal of Critical Pedagogy". The co-founder of The Paulo and Nita Freire International Project for Critical Pedagogy, she is the co-organizer of International Institute of Critical Pedagogy and Transformative Leadership, she is committed to a global community of transformative educators and community workers engaged in radical love, social justice, and the situating of power within social and cultural contexts, specifically involving youth.

Dr. Steinberg is an international speaker, teacher, and author. She is a collaborator with several countries in several continents. She is also active in Canadian organizations and a media contributor. In her position as Research Chair, she is dedicated to creating a robust global network infrastructure for critical youth and community workers. Her work in Islamophobia is rooted in re-articulating the changing nature of Islamophobia, in what she terms the Third Wave.

Dr. Steinberg's work focuses on the cultural/social/education development of youth, and critical community involvement. She is concerned with how society views young people, and her work creates an environment in which youth are viewed as positive democratic agents within society. As a Research Chair, she has established an international network of youth and community workers engaged in a critical pedagogical approach to activism and pedagogy. Her work is currently focused on issues of Islamophobia, Empowerment of Women, and Critical Diversity Studies.