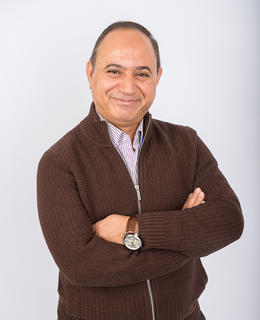 Fellow, The US Institute of Navigation (ION), 2017

Dr. Naser El-Sheimy is Professor and former Head of the Department of Geomatics Engineering, the University of Calgary. He held a Tier-I Canada Research Chair (CRC) in Geomatics Multi-sensor Systems. He is the founder and former scientific advisor of TECTERRA Centre of Excellence for Commercialization and Research. His research expertise includes multi-sensor systems for self-driving cars and unmanned ground vehicles, GNSS/INS integration, and mobile mapping systems. He is a Fellow of the Canadian Academy of Engineering and a Fellow of the US Institute of Navigation (ION).

Dr. El-Sheimy is an entrepreneur who led the establishment of 3 Companies and one research center (TECTERRA) from the University of Calgary. He is the founder and chairman of the board of directors of Micro Engineering Group and founder of Profound Positioning Inc., a leading company in navigation technologies.

Dr. El-Sheimy published two books, 6 book chapters and over 500 papers in academic journals, conference and workshop proceedings, in which he has received over 30 national and international paper awards. He supervised and graduated over 100 Masters and PhD students. He is the recipient of many national and international awards including the ASTech “Leadership in Alberta Technology” Award the Association of Professional Engineers, Geologists, and Geophysicists of Alberta (APEGGA) Educational Excellence Award.

Dr. El-Sheimy was the president of Commission I on "Sensors and Platforms" of the International Society for Photogrammetry and Remote Sensing (ISPRS) from 2008 - 2012. He organized and participated in organizing many national and international conferences and chaired many conferences such as the USA Institute of Navigation Global Navigation Satellite Systems (GNSS).  Dr. El-Sheimy is currently editor-in-chief of Geomatics journal (MDPI), a member of the associate editor of the ION Navigation Journal and the editorial Board of Journal of Satellite Navigation, MDPI Sensors, Journal of Applied Geodesy, and Coordinates.

Dr. El-Sheimy’s research interests include multi-sensor systems, mobile mapping systems, estimation techniques, real-time kinematic positioning, and digital photogrammetry and their applications in transportation, mapping and Geospatial Information Systems (GIS). Through his work at the University of Calgary, he was able to achieve outstanding international status with his team in three specific areas:

1. The development of inertial techniques for positioning and navigation. Dr. El-Sheimy work in this field contributed pioneering algorithms, products, and results which were recognized worldwide; for example, he:

2. Achieving international stature for his pioneering work on the integration techniques of inertial navigation systems with GPS for navigation and mobile multi-sensor systems. In this area, Dr. El-Sheimy research team:

• Developed VISAT, one of the first commercial Mobile Mapping System (MMS) in the world.

• Developed one of the first software in the world for integrating Inertial Navigation Systems data with data from GPS.

3. The third area which achieved international recognition is MEMS-based sensors algorithms for navigation systems. Dr. El-Sheimy’s pioneering work on this area led to:

• The development of the first techniques for smartphone-based navigation applications