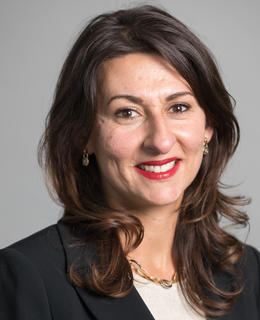 Professor Jassmine Girgis joined the Faculty of Law at the University of Calgary in 2008. Prior to that, she was a member of the Faculty of Law at Western University. Before joining Western, she was awarded the Paul Martin Scholarship, a full scholarship to undertake her graduate work at the University of Cambridge, where she graduated in 2006. Prior to that, she was the Silver Medalist in her graduating year from Western Law (2004) and served as the Law Clerk to the Honourable Mr. Justice J. Edgar Sexton of the Federal Court of Appeal in 2005.

Professor Jassmine Girgis researches and writes in the areas of director and officer liability, bankruptcy and restructuring law, and contract law. Her research primarily focuses on corporate restructuring and director and officer liability, and where they intersect. She also writes extensively on corporate rescue and its intersection with law and economics and with the public interest.

Professor Girgis has served on the Board of Directors of the Canadian Bar Association (CBA), Alberta Branch, and as the representative for Canada and the United States in Course Committee, INSOL International Certificate in International Insolvency Law. She has served as an elected Outside Director to the Board of the Canadian Association of Insolvency and Restructuring Professionals (CAIRP), as the Academic Member of the editorial review board for the CAIRP publication, Rebuilding Success, and as a Director and Secretary on the Canadian Insolvency Foundation board of directors. She also served as the Book Review Editor for the Canadian Business Law Journal for six years.